Little of note, until a call from Adam alerted me to news that Adrian 'Hagar' Harris had picked up a very young Little Grebe chick that had probably been caught up in the current and washed downstream.

"Bring it down now", I suggested to Adam. Time was very much of the essence as we needed to avoid this Little Grebe thinking that Adrian was its father. Most wildlife that Adrian has cared for becomes inprinted very rapidly - in the past this has included House Martin, Swallow, House Sparrow, 337 Canada Geese, a Ladybird (called 'Spot') and several clothes moths that simply wouldn't depart.

I phoned The Bearded One as he is rather partial to Little Grebes in the hand. 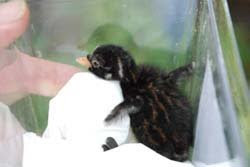 Eventually, after wandering round the lake, we located the nest under a weeping willow tree - we let it go. Later that evening the adults had returned to the area so hopefully 'Little Hagar' was reunited with Mum and Dad - ahhhh.
Posted by The Bald Birder at 21:58

hello....Greg Hitchcock sent me the link to your blog....really enjoyed it, some great pics...even the bat pictures....

Hi there Steve, thanks for the comments - seems as though we share part of the same patch. The bat snaps have been hilarious to take. Am trying to learn the various plants, insects, etc, as have been mainly in to birds, then butterflies, then orchids, then dragonflies, etc...
Will doubtless meet you in teh field sometime soon. Kind regards, Ross