Day one of this short trip to Scilly. Team Intrepid (the Good Lady Wiff, Old Father Time and my good self) arrived in plenty of time to gather provisions and then for me to head out on one of the mini evening pelagics. Joining the locals at 4.30pm, the weather was really calm and even if that hoped-for White-faced petrel didn't turn up - surely it was going to be a good opportunity to snap a few cetaceans - or citations, as Doug calls em. 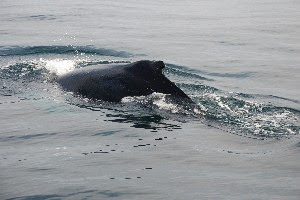 Only a mile out of Hugh Town harbour and I picked up a cetacean spp a couple of hundred yards in front - it then became apparent that we were indeed watching a whale species. An amazingly close encounter of under 20 yards had me suggesting Humpback - definately different from the usual Fin, Mankes that I've seen off the islands. 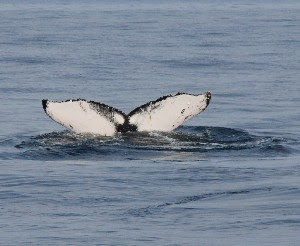 The ID was doubtful until a good view of the underside of the tail gleamed back white in the afternoon sun - this really was starting to look like the Humpbacks we'd seen in Antarctica a couple of years ago. 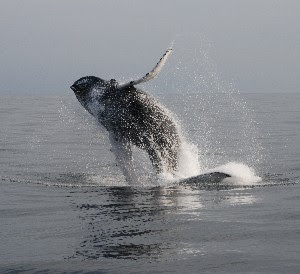 And then, just to ensure that we'd got the ID correct, the whale did what whales don't usually do - it lept out of the water to show us its flippers, tail, the whole flippin lot. Amazing!

We had the beast on show on and off for 45 minutes, during which time it breeched twice and generally performed superbly.For the observers on the boat the adrenalin maintained at high enough levels that we were all still buzzing from the experience several hours later when we arrived back at Hugh Town harbour. 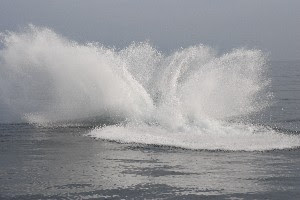 As for other stuff seen - who cares? We certainly didn't. OK, a Sooty Shearwater, several Manx and Stormies, couple of Black Terns, etc - and a damn great Humpback Whale!!!!!!!!!
Posted by The Bald Birder at 16:03

It's the oldest one in the book - using snaps from your worldwide travels to liven up the blog! Looking forward to seeing the snaps of the Orangutan you're going to discover in St Mary's tomorrow! No, seriously, it sounds like you're having a whale of a time in the South-West, great pics and can't wait to see the smug smile on your return!!!!

Wow....bring some back to the Medway!!! sounds like you are having a great trip.