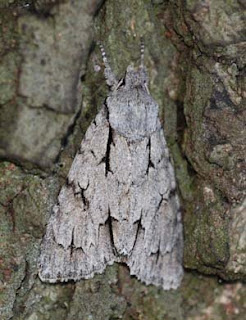 A wander round the tree trunks at work produced little of note (bark isn't that interesting) apart from this Grey Dagger. I say Grey Dagger, as opposed to Dark Dagger, owing to the similarity of this individual to the illustration in the Lewington moth book. Now truth be told, the two species can only be separated with any degree of certainty by close examination of the male genitalia (the moth's, of course!). As East Malling has an ancient by-law preventing such perverted activities, I left it it alone... but it still looks like the Grey Dagger. 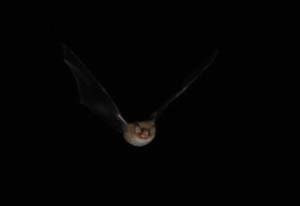 An evening stroll with The Good Lady Wiff produced a few bat shots - this one my favourite.

"Why only half a bat, Baldie?", I hear you shout. Cos the flippin thing was too low when I pressed the shutter. Would have been a great picture - as it is, I have a naff picture instead! 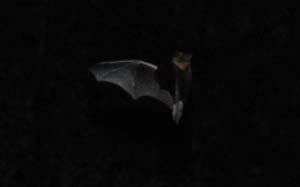 This chap is OK, but not nearly as good as the other two nearly were.
Posted by The Bald Birder at 22:38

Bat pics are getting better and better...

Bless you. One day, I'm hoping for that elusive shot, a picture of a bat that's actually in focus! Damn things!