What to do? Attempt Sand Lizards in cool weather in Surrey or something a little closer to home. Forgoing a trip to the Surrey heaths, The Bearded One and I met up on Sunday morning. We knew there was a Valley of Visions Dormouse walk on at Burham Down - but we hadn't booked on this 'Booking Essential' trip and we didn't know where to meet up.

Undaunted by such minor failings in our plan, we opted for the Blue Bell Hill car park - and there, in glorious monotone, a Kent Wildlife Trust Landrover, complete with warden Steve, all ready to go on a Dormouse walk.

Yes - we could join in... marvellous 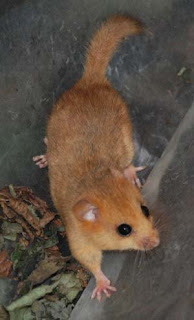 A guided walk around various parts of Burham Down, talking about copising, etc, was excellent whilst a visit to the nest box scheme produced one male and a female with young. The male was duly weighed and recorded.

Only down side of the day was the pillock who, on being shown one Buzzard at close range, then pointed to four distant gulls circling over the lakes in the medway valley and declared, "Four more Buzzards"!!!!!! One of these gulls was even a flippin adult! Now you might think I'm being rather harsh with my comments - but when corrected (by a few of us) he still insisted he was right and that everyone else was wrong.... and we were very polite about the whole 'eposode'. 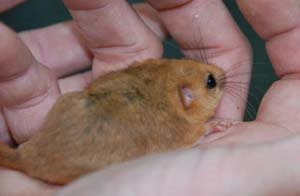 And my 48th species of mammal in the UK (I think).


It was after a pub lunch and whilst on stroll along the Pilgrim's Way that day really went Pete Tong. Mega-alert on the pager, Audouin's Gull at Chapel St Leonard's, Lincolnshire.

Now, I must be the only Kent based birder that needs Audouin's Gull - having missed the first one due to a birding trip to Equador. I had phoned The Bearded One from Madrid, on my way home, to see if there was anything about, to receive the reply, "Not any more", and then to be told about the Dungeness bird.

And if that wasn't bad enough, even the Dunge bird wasn't my first attempt at Audouin's Gull - Doug and I had headed to Montrose several years ago on a rumour that turned out to be nuffin!

And if that wasn't bad enough, I dipped the Yorkshire bird by an hour.

And if that wasn't bad enough, I dipped the second Dunge bird by thirty minutes.

And if that wasn't bad enough, I then, in classic 'bad-Audouin's-luck-style', missed the Dorset bird by under one second - the bloke was looking down his scope at it, he beckoned me over, he looked at it again, "Yes, still there", he leant back, I leant forward, a nearby car back-fired and all the f...f...f...gulls flew - never to be seen again.

Now, half way round a walk , somewhere along the Pilgrim's Way wasn't ideal with a wife who's nearly 7 months pregnant - but I shall be eternally grateful to her heading back to the car as quickly as possible and probably overdoing things as she did.

Just after 4.30pm, and fully ladden with loads of office work to do the following day, I drove the car out of the parking bay, filled the car with fuel and headed north. The sat nav said ETA = 8.25pm... The pager said, 'negative news' followed by 'negative news'...

A 'positive' drive found me in the car park at Chapel St Leonards at 7.30pm, a walk up the steps found me alongside Lee Gregory, Matthews Deans and a mass of Lincs birders. Knowing my past experience of Audouin's, Lee declared that the bird wouldn't show this evening and the others duly headed off for chips.

20 minutes on and a few local birders had picked up a distant gull on the sea - as it drifted closer and closer it became more and apparent that I was looking at my first UK Audouin's Gull. Many birders were struggling to get on to the bird (those gathering chips were finding it impossible). Drifting in a southerly we were surely heading for an excellent 'swim past' (the lazy bird equivalent of a fly-past'), but, just as all the salient features had been noted, this little b...b...b...bird had other ideas and duly flew up and directly out to sea. The chip hunters ran back and just saw the bird distantly as it tried to look like any other distant gull.

The 180 mile return drive was completed at a slightly more sedate pace, with my bed eventually bumping in to me at around 12.30am.