News late yesterday of a probable Glaucous-winged Gull in Cleveland was intriguing.

I had missed the Welsh bird as its appearance had coincided with my first wedding anniversary. Having left work the Friday afternoon when news first broke, I dipped that evening and eventually at midday on the Saturday had to jack it in to meet up with the Good Lady Wiff. It was as I got to Reading that news of its reappearance came through on the pager.

If that wasn't bad enough, I stood around like a lemon at Beddington Sewerage Farm with several others and for several hours the day after it was found there by Johnny Allan.

Glaucous-winged Gull - the only bird that I've (so far) missed cos of family.

So fast forward to 1st Janualry 2009 - interesting news indeed. We were due to head south on 2nd or 3rd of January, and had been contemplating a trip to see Barnacle Geese on the West coast and then visit friends in Cheshire... On the Thursday night plans were on hold and a mega alert at 10.11am changed our plans for good - the East coast route it was.

With a wee spog needing feeding, changing, etc and saying goodbye to relatives who wouldn't see the little lad until the Summer, I had to bide my time till departure at 11am. The sat nav said an arrival time of 15.00 hours - this was surely going to be tight (we made provisional plans for overnighting in Cleveland) and set out.

The world and his wife were on the roads around Edinburgh, every time I made up a few minutes I then lost a few in traffic. A stop for petrol; a stop to fill the washer bottle - these were all costing time. The sun hadn't ventured very high in to the sky as was now slipping ever further towards the horizon - a Cleveland bed seemed the only option, especially as the bird hadn't been since since 11 something this morning. 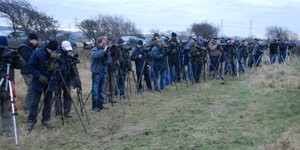 But, for the time being at least, Glaucous-winged Gull sits on my UK list - and that makes me smile! (photo from Newton Stringer blog - thank you!)

sounds like a bit of a manic break, BB! Still it all turned out well in the end.

Newton Stringer - 'Nice pic?' It was the best picture I could find on the web! Hope the acknowledgement and 'thank you' was OK. Let me know if not and I'll remove. BB