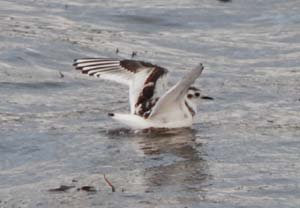 Departure day - news though of a Hudsonian Whimbrel on Porthloo Beach had me out rather rapidly in a quest to add this to my non-existant Scilly list. Alas, I was a minutes too late for the bird which had departed before my arrival.

A nice juvenile Little Gull was seen in amongst the Black-headed Gulls. 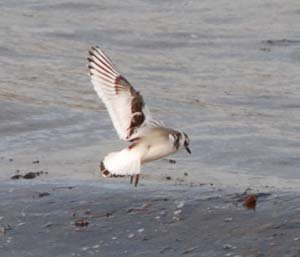 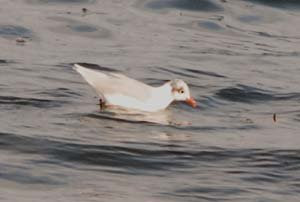 Also in the gull flock was this Med Gull.
And now it was time to head for the flat and clear up before heading to the airport for the flight home.
With one helicopter out of action our flight was delayed, further and further 9at least 2/3 hours we were told).
I departed the terminal to see if last night's Dotterel was still on the airfield. En route a fly-by Wryneck below Tolman's Cafe was a welcome sighting - but with no sign of the Dotterel the message came through that the Citrine Wag was still on Porthhellick beach - runing round to the beach I could hear the thing but not locate it...
I checked through the waders on the beach in case the wagtail was amongst the Ringed Plovers - my attention was then drawn to a wader producing a quiet almost grunting noise (I'm rubbish at describing calls). Flying over and landing amongst the plovers a cool juvenile Buff-breasted Sandpiper - amazingly it walked right in front of a chap who was filming the Ringed Plovers - I later asked him if he got good shots of the Buff-breasted, but he hadn't noticed it and would checked his footage later. 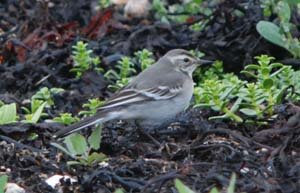 With the Citrine still calling, but now behind me, I located the chap who posed just enough for a few pics. Now this really had to be the end of this holiday.... a what followed was a run back to the airport, only to be put on a plane to St Just as the chopper was out of action all day.

sounds like a fantastic trip - great photos as well (especially getting the HB Whale pictures in the press....thay was you wasn't it?)

It was a genuinely nice family trip with a highlight at the start (the whale) and then some good (for me!) finds at the end. Was nice to get some publicity for my whale shots. All the Scilly birders were telling me to get some dosh for them - so I did. Just thinking about getting a new les with teh proceeds - we'll see.
Would be nice to have some of Warren's Whinchats over here - though I guess Honey Buzzard is a good candidate for this weekend. Ross