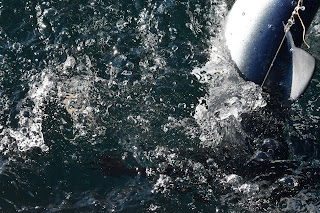 During my various 'Scilly Pelegic' trips out on the Sapphire, with Joe Pender at the helm, over the past 100 years, it has been some of the non-avian sightings that will also vividly remain with me until the days I'm drinking soup through a straw at the cheapest old people's home... Various species of whale have done their stuff in front of me - including the majestic Humpback - while 'By-the-wind Sailors' have fascinated, Tuna have amazed, many dolphins have enthralled and even a Leatherback Turtle has graced my gaze (the latter on one of the original 'Scillonian III' pelagic trips, rather than on the MV Sapphire).

The fun of heading out a few miles off Scilly to see seabirds every few years, should be enough to lure fellow enthusiasts (or nutters as some non-birders may refer them) out on to the open waves. But...like much of watching nature, there is no guarantee a rare seabird on every trip - and if there was, it wouldn't be quite as much fun - honest guv! 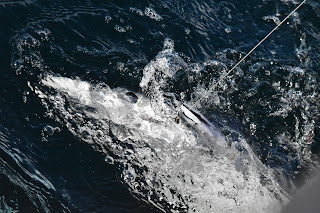 One group of animals, though, has always added a real degree of excitement onboard Scilly pelagics - the sharks. Far from being a random coincidence, the average 'shark-seeker' and 'rare-bird-seeker' both go about their hobbies in similar ways...lobbing an onion net, filled with festering fish, overboard (but still tied to the boat) draws in the birds and it draws in the sharks. While the resulting fish-oil slick can be whiffed by the birds from miles away, the same is happening under water with sharks being drawn in by the new oceanic underwater odours. 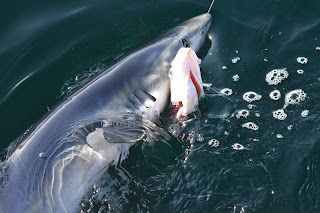 The commonest species of shark encountered by the fishing folk is the Blue Shark. On a good evening's trip out a few of these fantastic beasts, measuring 3-6', can be hauled out - but that is only a part of the story... They aren't being caught for the benefit of my soon-to-be old-age soup, but rather more - they are contributing to wider studies looking at the annual migrations, growth rates, biometric changes, etc, that only smart 'tag-and-release' projects can deliver. 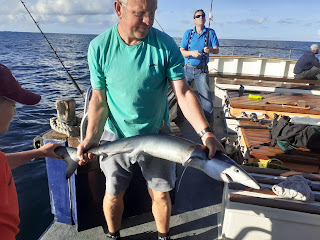 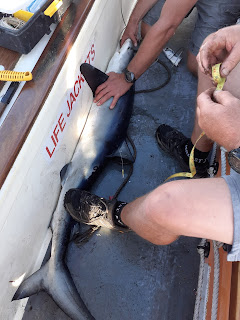 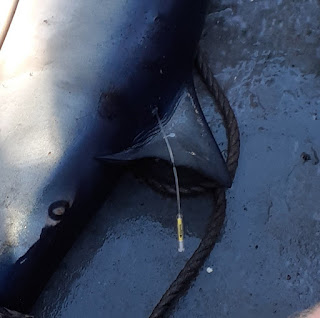 The Blue Sharks tagged off Scilly are helping ecologists gain ever greater knowledge about this beautiful beasts - and armed with greater knowledge, we can do more to help preserve numbers for the benefit of a healthy ecosystem. 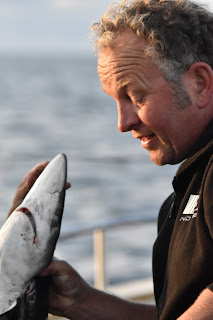 The second most common species attracted to the chum, is the Porbeagle Shark - whilst the Blue Shark in sleek and elegant, the Porbeable Shark is a mean-looking member of the 'Mackerel Shark' group. The Mackerel Sharks are also known as the white sharks and they include within their group, the most famous of them all, the Great White. Our Porbeagle is common around UK waters and those that wander off-shore are also occasionally caught and tagged as part of the tag and release projects mentioned above. 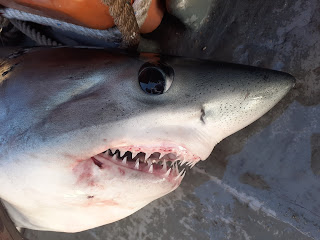 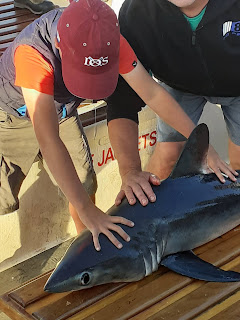 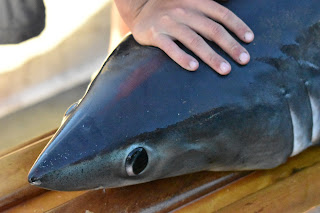 The third species of the shark family that I've seen pulled out, has been the Spurdog. Not quite the formidable beast that is the Porbeagle, the Spurdog is, none the less, as very sleek looking member of the wider shark family. The one photographed below was caught off Scilly in August 2018. 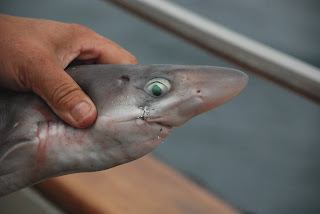 All of these beasts have been sent on their merry way - free to roam the underwater routes that take them round our seas. Their brief visit in to our world has been an exciting addition to fantastic trips off Scilly with Joe Pender, aboard the Sapphire, as part of the trips out that Joe and 'Scilly Pelagics' offer to those wanting to see something new and something very special.