'By-the-wind Sailors' - One of nature's beauties, off the Isles of Scilly

A message on the Isles of Scilly Natural History Group WhatsApp channel (I'd be surprised if you're not already on it...) highlighted a couple of fascinating 'By-the-wind Sailors' that had been found on St Martin's a week or so before my Scilly vacation. I confess, I'd never actually even heard of these strange jellyfish relatives...and, sure enough, initial searches of the beaches on Scilly produced nothing - but I was looking...
On 29 July, my fortune changed and whilst out paddleboarding in Porth Mellon Bay,  I found two of these strange but very beautiful creatures floating about (or so I thought). I assumed they were actually dead as they were the wrong way up and floating about like a couple of bits of plastic. Indeed, when I showed them to Max, he said he'd seen some previously when we'd been paddle boarding in Porthcressa Bay, and had thought they were car indicators!
This brush with something new in the natural world was great - going from unknown to reality in about ten days.
Finding a 'By-the-wind Sailor' in a slightly healthier state, rather than a 'plastic' cast was the next stage in my quest to finally say I'd seen a proper one.
Back on Porthcressa Bay, my continued beach combing eventually came up trumps... 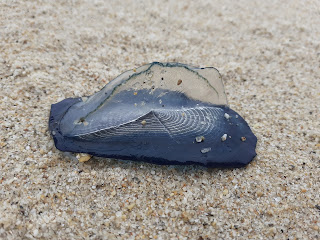 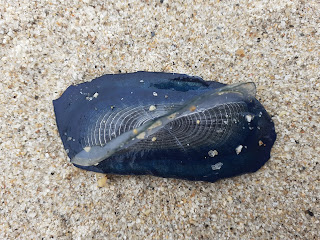 A few BTWS (sorry, I can't be arsed to write 'By-the-wind Sailers' too many more times...) were found along the very recent high-tide line - they were stunning, they were really quite beautiful, but they really weren't 'quite' alive... Further paddle boarding trips out in the various bays failed to produce the 'live' beasties...
It was on 3 August, that my golden b*ll*cks luck manifested itself once again (for previous examples, scan back to the 30 July entry...). As we set out on another Scilly Pelagic trip with Joe Pender on the MV Sapphire, and with excitement high (us birders do get enthused at the prospect at gazing at waves, hoping for a rare bird to appear), we slowed to see something large breaking the water - the views weren't great and looking back I can't even remember if it was a dolphin or a tuna...oops. But what I did see was my personal Holy Grail at that moment in my conscious - a real, swimming (somewhat lazily, I admit), live, BTWS!!! OK, this wasn't quite up to Mr Attenborough's clumps of migrating Wildebeasts on the Serengeti, or his rather close natterings with Mountain Gorillas in Rwanda, but all the same...that wee blue blob of BTWS was just brilliant! 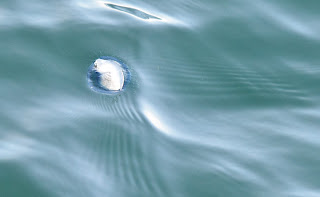 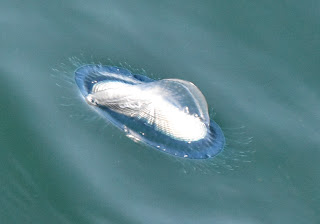 Nature, hobbies, sightings - it matters not a jot what other people think, it's what you get out of seeing in the natural world that's important - and just then, for me, this was very special!
And now, I really, really, really want to see a Portuguese Man o' War in British waters... One day perhaps!
Info about BTWS - According to the WikiWorld:

Velella is a monospecific genus of hydrozoa in the Porpitidae family. Its only known species is Velella velella, a cosmopolitan free-floating hydrozoan that lives on the surface of the open ocean. It is commonly known by the names sea raft, by-the-wind sailor, purple sail, little sail, or simply Velella.

This small cnidarian is part of a specialised ocean surface community that includes the better-known cnidarian siphonophore, the Portuguese man o' war.

Each apparent individual is a hydroid colony, and most are less than about 7 cm long. They are usually deep blue in colour, but their most obvious feature is a small stiff sail that catches the wind and propels them over the surface of the sea. However Velella sails always align along the direction of the wind where the sail may act as an aerofoil so that the animals tend to sail downwind at a small angle to the wind.[5] Having no means of locomotion other than its sail, V. velella is at the mercy of prevailing winds for moving around the seas, and are thereby also subject to mass-strandings on beaches throughout the world.