Only thing of note today was a call from Zebedee to say that the Azorean Gull seen by my good self and Adrian Teapot in Cornwall on the 12 October, has been 'officially' split and accepted as a British first by Lord Lee.

Can't argue with that...... And at least this unilateral decision making is quicker than the BOURC. 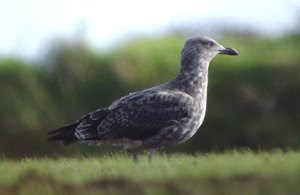 This photo of the gull kindly supplied by Adrian Teapot now that he has finally returned from Abberton Reservoir. Rumour has it, he actually lives in one of the hides at Abberton - there, and I thought he lived under a stone.

Armchair ticks - love em!
Posted by The Bald Birder at 12:42