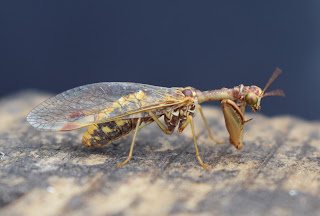 Opened the moth trap this morning, to be confronted by this beauty - seemingly a Mantispa styriaca, or Styrian Praying Lacewing. Wow! And one of the greatest joys of this beauty, is that I simply didn't know such a group of insects existed. Top end of a Praying Mantis: Arse end of a Lacewing - brilliant!

Wikipedia entry lists a fascinating aspect of it's ecology - closely woven with a spider: "In the spring, the larva searches for a female wolf or fishing spider, of the genera Lycosa and Dolomedes, in order to bore its way into the cocoon that the spider carries on its abdomen, by biting a slit open. It is carnivorous in its first stage, as shown by dead spiders being found around it. Before the larva molts, it resembles a dipluran of genus Campodea. After the larva's first molt, the species has short legs that it cannot use, a small head, has jaws that extend straight out, and has pointed antennae that extend beyond the jaws. Once the larva starts metamorphosis, it pupates by spinning a cocoon inside the spider's egg sac, in which it stays up to 14 days before its final molting.[2] Pupation happens in the middle of June. It is a nymph after emerging from the cocoon, not yet in its adult form.[1][2] Once it enters the adult stage, the species hunt for prey by using fast strikes of their forelegs that can take less than 60 ms. Its hunting style is similar to that of the praying mantis.[3]

Friedrich Moritz Brauer, an Austrian entomologist, discovered the first instar on vegetation in 1852. It was not until 17 years later that he discovered the other instars within spider egg sacs."

Utterly brilliant!
Posted by The Bald Birder at 22:10