In 1991 I had been at a trade show when the Shetland Sandhill Crane turned up. In 2009, I had been in Australia when the South Ronaldsay bird arrived on Orkney.

News of the adult Sandhill Crane on mainland Scotland gave the potential to see a much wanted blocker. 18 hours after news broke, John Clements and I were watching a Sandhill Crane at St Combs - job done! 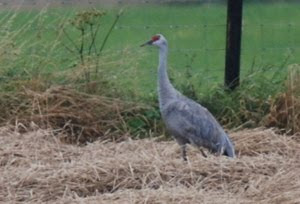 Seen feeding at 70-80 metres range, the bird was feeding in recently harvested cereal crops. It seems that the bird has actually been around 6 days already as a visitor to the RSPB's Loch of Strathbeg reported a crane last Saturday.... 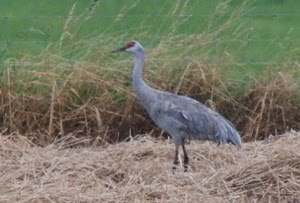