Arrived in Kent for a weekend of socialising and much merryment. And all was going well until 12.30pm ish when the pager mega'd an Empidonax Flaycatcher spp on Blakeney Point...

Having seen the Cornish Alder Flycatcher in 2008, I was calm until the ID was released - probable Yellow-bellied Flycatcher - a first for the Western Palearctic - bugger!
With son sleeping and wife out nattering it was until 15.33 that I gathered John Clements for a drive north.
Pulling in to the coastguards car park at 17.58 it was now that the difficult part of the journey was about to begin - to walk the complete length of Blakeney Point into a 65mph gusting wind!
With the sea producing a blanket of foam 50+metres inland, it was touch and go as to whether we'd make it out to the Plantation before the light fainally faded.
Captain Clements did the sensible thing and turned round at the Half-way house (which is nearly two-thirds of the way along Blakeney Point) - a few others, myself included battled out to the and joined Chris Heard, Franco, et al in a fruitless search - we'd missed it.
Now, in the dark, we all legged in back to the car park - this time aided by the gusting wind which had previously held us back. A telephone call ahead enabled beers and scampi to be ordered before the kitchen closed. Soaking wet, we ate and drank and discussed the ID of the flycatcher that we hadn't seen.
Sunday morning dawned slightly less windy than Saturday had ended - this time with news of the bird still present, we hopped on the seal watching boat and were transported to the end of Blakeney Point in minutes. 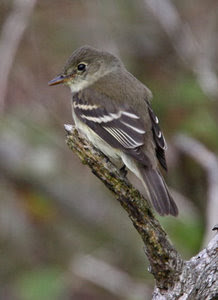 After a quick leggin-it we saw the bird - now re-identified as an Alder Flycatcher (my second) - bugger! (Great shot by Jim Lawrence - nice one Jim)
Posted by The Bald Birder at 23:05