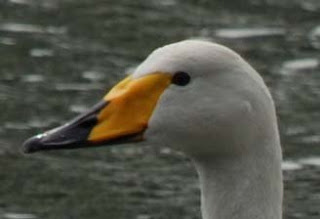 After communting round New Hythe lakes for a wee while this adult Whooper Swan visited Bradbourne House lake. I am in no doubt whatsoever that this is a feral or previously captive bird - yes, I'd like it to be the genuine thing, but I'd only be kidding myself. I've heard some people claim the New Hythe bird as good - but it certainly doesn't tick my boxes to get itself on to my site list. A shadow in the nostril can make it sometimes appear as though there is a black mark half way up the front edge of the yellow - a close up shows a bit more of the detail.