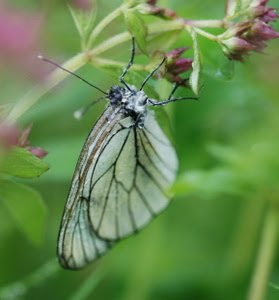 I would really loved to have witnessed Doug's arrival at Stockbridge Down an hour or so later - he pulled up, parked up and walked up to a Doctor and his family as they, very sodden, were finishing their unrewarded searches. Asking if they'd had any joy, he was rather unsurprised at their complete lack of success - then, he looked around and saw two branches 12 feet apart. "Follow me", he surprisingly announced and led the family party over to a small clump of vegetation where a short search of the correct plant revealed a perfectly peaceful, Black-viened White.
Posted by The Bald Birder at 22:33