A special day today - my first flight to see an insect. Today's destination was Northern Ireland with the hope of seeing one damselfly and a butterfly. Either of those under my belt would be quite acceptable - both, would be a real result.

Up at 4am for an early morning flight from Stansted to Belfast the first stages were completed without problem for me the captain or the aeroplane - car hire collected, my next challenge was to find the Montiaghs Bog NNR. Now in theory this should only have been a short drive from the airport. However, for me it was endless frustration as I couldn't work out where to stop and start looking...

For 10 minutes I stood at a quiet cross-roads trying to work out which direction I should head, according to the hand-drawn map I held. Eventually, a local farmer stopped and offered help. My questions brought a wry smile to his furrowed head - the pools I was driving around in search for were less than 30 metres away over a fence and behind some bushes! 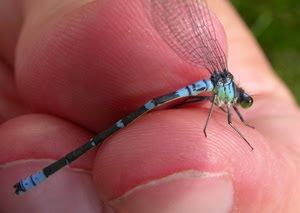 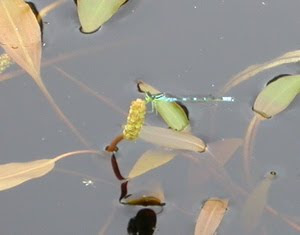 Irish Damselflies
Next stop for me was the Peatland Country Park for Real's Wood White - again trying to navigate around NI on my tod whilst driving was anything but easy. I tried several likely looking locations for arriving at my chosen destination. Thankfully on arrival, locating my first Real's Wood White was easier and 6 or 7 individuals were seen with relative ease.
One RWW was very confiding - even allowing for some sought-after close ups. Phew! 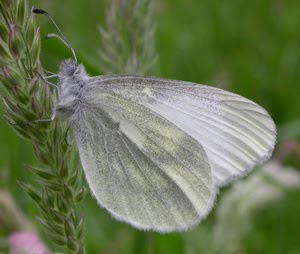 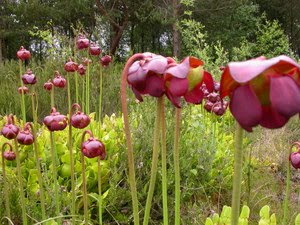 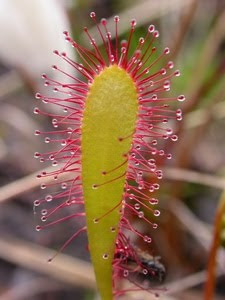 Oval-leaved Sundew
Other bonuses on the trip were the Pitcher Plants at the Peatlands and numerous sundews at various locations.
With both target species UTB and several hours to spare I travelled clockwise round Loch Neigh on the A31 up to Coleraine and on to the Giant's Causeway - that fantastic geological formation.
The return trip to Belfast and flight back to Stansted was followed by a return drive to Kent. At 11.30pm I arrived home for bed - knackered! Still - some good insects on the old list!
Posted by The Bald Birder at 21:59